Inflation is back, maybe

The most recent CPI All Urban Consumer reading come in at +2.1% for January 2018 over January 2017.  This has been the first reading of plus 2% in six years and thus the stated 2% Fed inflation target has finally been reached.  It’s worth keeping an eye on, but it’s unlikely to see the Fed adjust their policy of normalization based on a single reading of plus 2%.  Most analyst still expect the Fed to raise the fed funds rate 2-3 times in 2018.  Even more importantly, this reading should remind us all that inflation is one of the major risks in retirement planning and should not be neglected even after a long period of lackluster inflation readings. 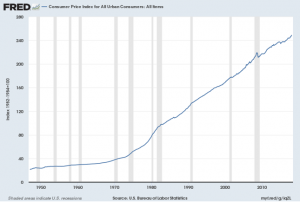